Valerie Barnes Lipscomb on stage at the Asolo Repertory Theatre, where she served as a resident expert during the 2019-2020 season

Valerie Barnes Lipscomb’s groundbreaking research into ageism in modern drama and theatre is rooted in the premise that age is performative—that we really do “act our age”—and that nowhere is that more clearly evident than on the stage.

“I argue that our culture’s understanding of what it means to grow older is revealed in the theatre,” said Lipscomb, a professor of English at the USF Sarasota-Manatee campus whose 2016 book, “Performing Age in Modern Drama,” is the first to explore the concept in depth.  “This is manifested not only in portrayals of older characters, but also in plays that feature characters who change ages on stage.”

One such character is Willy Loman in the iconic memory play “Death of a Salesman.”  Loman appears onstage as both a 63-year-old man and, in flashbacks, a much younger version of himself. “He simply turns around and is younger,” she said. “That assumes that Willy is essentially the same in his 40s as he is in his 60s. It shows us a lot about how we conceive the self, or whether we consider ourselves to be the same person, no matter how old we are.”

“We tend to see aging only as decline, but drama shows us other possibilities, other ways to conceive of the aging self. Theatre can fight ageism.”

Lipscomb has challenged the ageism that still is broadly accepted in society. One example in theatre is casting, she said, when directors make the decision to use a much younger actor to portray an iconic role such as Loman. “Why do we trust that someone who is 37 can perfectly originate the role of Willy Loman? What does that show us? Age and ageism affect absolutely everyone and ought to matter to everyone.”

When Lipscomb began examining conventions of age in theatre, scholars had focused on commonly recognized binaries within categories of identity – such as black versus white, male versus female, gay versus straight – but had overlooked aging. That omission itself reflects unconscious ageism.

“Age is the only category where, in the typical course of life, you move from one end of the spectrum to the other,” she said. “Because we start out at the young end, where we are privileged, and we end up at the other end, where we are not privileged, we internalize ageism. We tend to see aging only as decline, but drama shows us other possibilities, other ways to conceive of the aging self. Theatre can fight ageism.”

Lipscomb’s current projects include co-editing a book on age and literature, featuring research from 30 authors in what is expected to become a major contribution to age studies and literature, she said, as well as writing the drama chapter for an upcoming companion to aging in literature. 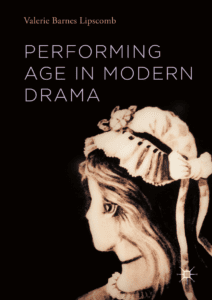 Performing Age in Modern Drama is the first book to examine age across the contemporary dramatic canon. Valerie Barnes Lipscomb interprets the performance of all ages across the life course both on page and on stage, not only in professional productions but also in Sarasota-Manatee senior-theatre groups.