As an avid animal enthusiast with two dogs, Anthony Coy had personally experienced the benefits of pet ownership – feeling comforted during difficult times and sharing in life’s positive moments. However, even before he set out to do his own research on the relationship between pets and their human companions’ well-being, Coy was well aware of previous studies that often produced contradictory results. Some show pets-especially dogs-improve psychological health and could alleviate symptoms in individuals suffering from depression and anxiety. Others weren’t as enthusiastic.

Coy knew previous research had found that people with extroverted personalities trended toward dogs, while introverts preferred cats. Coy, a USF associate professor of psychology based at the Sarasota-Manatee campus, wanted to take those findings a step further. In collaboration with Sarasota-Manatee campus honors student Jasmine Puskey, he explored whether one’s personality might determine whether they saw benefits from spending time with pets. Specifically, they sought to investigate whether matching the right owner with the right species of pet made a difference when it comes to mental-health-related issues.

Their findings are based on anonymous online surveys of 142 individuals who responded to pet-related questions and completed a personality inventory and a depression scale. They suggest a relationship between pairing people with their preferred pet and a general sense of well-being. They found a less convincing connection between mental health and the mere presence of a pet in the home, regardless of preference.

“In both studies, we found some evidence that if you prefer a pet, then yes, it’s going to help you and make you feel better,” Coy said. “If you’re a cat person and you’ve got a dog around, you’re probably not going to be happy, and that could drive you deeper into depression.”

On the other hand, a cat could be beneficial to a cat person, but prior findings on that are far more limited.

“This has been exacerbated by the fact that a lot of the human-animal interventions that are out there only use dogs, so people are really self-selecting into these studies,” Coy said. “They might like dogs and think the study will enable them to be around dogs if they participate, and that might make them happy. Cat people wouldn’t do that. Their response would be, ‘Why on earth would I want to participate in that study?’”

The study provides some evidence that a person who prefers dogs might become more depressed by the presence of a cat in the house. Similarly, individuals who preferred only dogs or only cats were more likely to be depressed if both dogs and cats were in the home. However, he said, “That’s really the next step. We want to follow people for a number of years, before and after they adopt a pet, to see both short-term and long-term effects.”

The research holds some promise of real-world application. 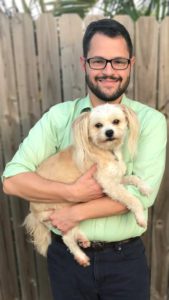 “One is, don’t have a non-preferred type of pet in your house, because it might actually be harmful to you,” Coy said. “At a research level, I think we need to do more interventions where we’re giving people the options of different pets and maybe even putting people in uncomfortable positions — ‘You like dogs? Well, you’re going to interact with this cat’ — to gain a better understanding of how these interventions actually work.”

Coy noted such studies would require ethical considerations to remove participants with phobias of specific species. He believes further research and findings from human-pet interventions could help animal shelters train employees to better guide people in selecting pets to match their personalities.

“Often shelters try to pair on traits like activity level of the animal and person, but don’t consider deeper psychological factors,” Coy said.

This kind of informed alignment potentially is more valuable than assuming that any pet can help improve its human companion’s emotional state.

“Particularly for people that have some sort of mental health concern, there is the danger of, ‘We’ll give you a dog, and then you’ll be fine,’” Coy said. “I think that probably is not always the case.”

Coy’s work was recently published in the leading international journal on human-animal interactions, “Anthrozoös.” He currently is conducting a funded national study that further explores the mechanisms that underlie the psychological and physical benefits of owning pets.