While plenty of quantitative research exists to establish the relationship between crime rates and poorly lit areas, few studies have offered the promise of helping direct precisely where streetlights should be located to curb criminal activity.

Rustu Deryol, an instructor II who teaches at the USF Sarasota-Manatee campus, and colleague Troy C. Payne of the University of Alaska Anchorage helped fill existing gaps in the literature with a study published in 2017 in Crime Prevention and Community Safety.

Their work focused on Cincinnati, Ohio, using data from the Cincinnati Police Department over a four-year span. To test their method, they selected a neighborhood in which police had chosen to install street lights in 2014. Using 2010-2013 crime data provided by the police department, they sought to determine whether their findings would substantiate the choice to install lights along the selected streets.

They began by creating a 100-foot by 100-foot grid of cells over the study area. From there, they merged daily sunrise and sunset data with the date of each crime-related incident to enable them to assign each incident a daytime or dark-time value.

Next, they aggregated crime counts within the cells, generating five variables for each cell: 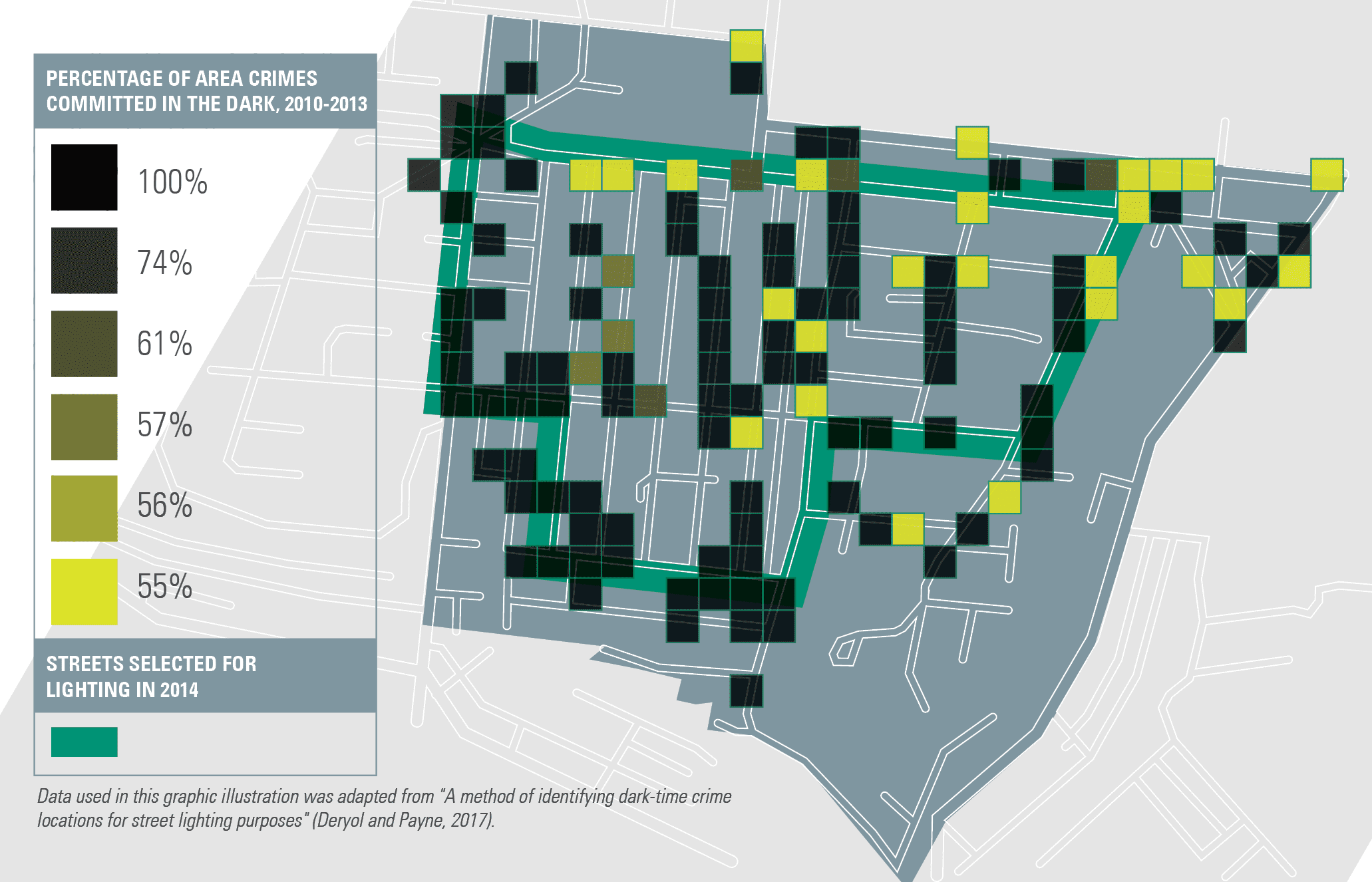 The researchers then identified hot spot crime areas across the four-year period and used a data mining tool-a Self-Organizing Map (SOM)-to pinpoint grid cells that were similar to one another in total violent crime count, the proportion of violent crime that occurs at night and the average of adjacent cells’ violent crime count.

Their findings revealed temporal patterns of violent crime within spatial hot spots. For example, many of the areas that the police chose to light in 2014 showed mostly “dark” cells indicating 100 percent of crime there from 2010 through 2013 had occurred at night. The selection of these areas for lighting was well justified on the basis of the proportion of nighttime crimes, the researchers concluded. However, those cells were not the source of the highest frequency of total violent crimes.

“Using this data, we implemented a data mining method for selecting street segments to be lighted to aid in nighttime violent crime prevention,” said Deryol, a criminology instructor and a former member of the Turkish National Police. “The study also will help perform a pre-installation analysis for property owners, homeowner associations and urban planners who plan to choose street segments to be lighted.

“Deciding about the selection of streets or street segments obviously has economic impact on taxpayers,” he continued. “Lights have installation costs, plus ongoing energy costs and routine maintenance costs. Choosing the right locations for lighting purposes is very important for the effective use of public funds.”

Deryol said the findings confirmed the previous decision by police officials in Cincinnati to add lighting (see graphic below) in areas exhibiting an elevated frequency of dark-time crimes within the neighborhood the study examined. He believes the analysis can be replicated in other cities to assist with decisions about selecting streets for lighting and crime prevention purposes.

When the Cincinnati Police Department sought to light streets in Cincinnati’s CUF neighborhood in 2014, Deryol used the self-organizing map (SOM) method to grid, identify and cluster areas similar in criminal activity based on 2010-2013 crime data. The darkest cells show areas in which 100 percent of crimes were committed in the dark. Since most of the area’s crimes occurred at night, the data shows that installing street lights along the perimeter of the neighborhood (indicated by teal lines) was an appropriate step toward reducing future crime. Using the SOM method can help officials identify patterns of dark-time crime and make data-driven decisions to prevent crime.