Two years ago, Gucci pulled a sweater from store shelves after criticism about the garment’s resemblance to blackface. The black balaclava sweater came with an oversized collar that lifted over the chin. It included a slit for the mouth that was ringed by what appeared to be giant red lips.

The company issued a public apology. But that was hardly a one-and-done for luxury fashion. A little earlier, outerwear company Moncler pulled its “Malfi” jacket amid outrage over a big-lips insignia that also evoked blackface. Prada drew a similar rebuke in 2018, forcing it to withdraw a monkey bag charm, and in 2019 the Katy Perry Collection withdrew a line a black leather shoes that featured blue eyes and big red lips.

“I was saddened when it was brought to my attention that it was being compared to painful images reminiscent of blackface,” the singer said of the design. “Our intention was never to inflict any pain.”

The images, of course, harken to when white actors painted their faces black to satirically portray racial stereotypes associated with Black people. That these images persist today – and as part of promotional messaging – is mind-blowing. But don’t be surprised, says USF Associate Professor of marketing Kelly Cowart, who has produced a stream of scholarly research on cultural representations in advertising.

She says that companies have long played against racial stereotypes and mostly without backlash. What these latest episodes demonstrate if anything, she says, is how quickly today’s marketing professionals can pivot their messaging to depict an appearance of contriteness and racial sensitivity – now that it’s fashionable.

“What we’re seeing are companies bending over backwards to show how sensitive they are to race,” Cowart said. “They’re in a hurry to show images of Black people or interracial couples using their products or services so they can give the impression that they’re a culturally and racially inclusive company. Whether that’s true remains to be seen.”

Cowart worked in marketing at the corporate level in Dallas/Fort Worth and ran her own marketing company before she began her academic career. She earned an MBA at Syracuse University and a PhD in business administration with a concentration in marketing and social psychology from Florida State.

Among her recent studies are articles that examine the connection between marketing and social issues, including, An Investigation of Androgyny and Sexual Orientation in Advertising, “Journal of Advertising Research” (2020); Promoting Consumer Well-being: Examining Emotion Regulation Strategies in Social Advertising Messages, “Journal of Business Research” (2020); and Empirical Evidence of the Effect of Colorism on Customer Evaluation, “Psychology & Marketing” (2020).

“This wasn’t a cultural sensitivity class per se, but I wanted the students to be aware of how certain images can cause pain or anger to a group of people while also having the potential to damage a company’s reputation.”

And in June 2021, she presented a paper, “COVID-19, Social Injustice and Message Framing,” during the Academy of Marketing Science Annual Conference.

Cowart currently teaches graduate and undergraduate courses at the USF Sarasota-Manatee campus, with a focus on marketing research and professional sales. She also has taught marketing strategy, principles of marketing and sales management.

In spring 2021, she revamped her graduate-level class to combine her interest in cultural representation with a student-focused, hands-on promotional project. As part of the project, student teams developed and implemented promotional plans on a $500 budget. 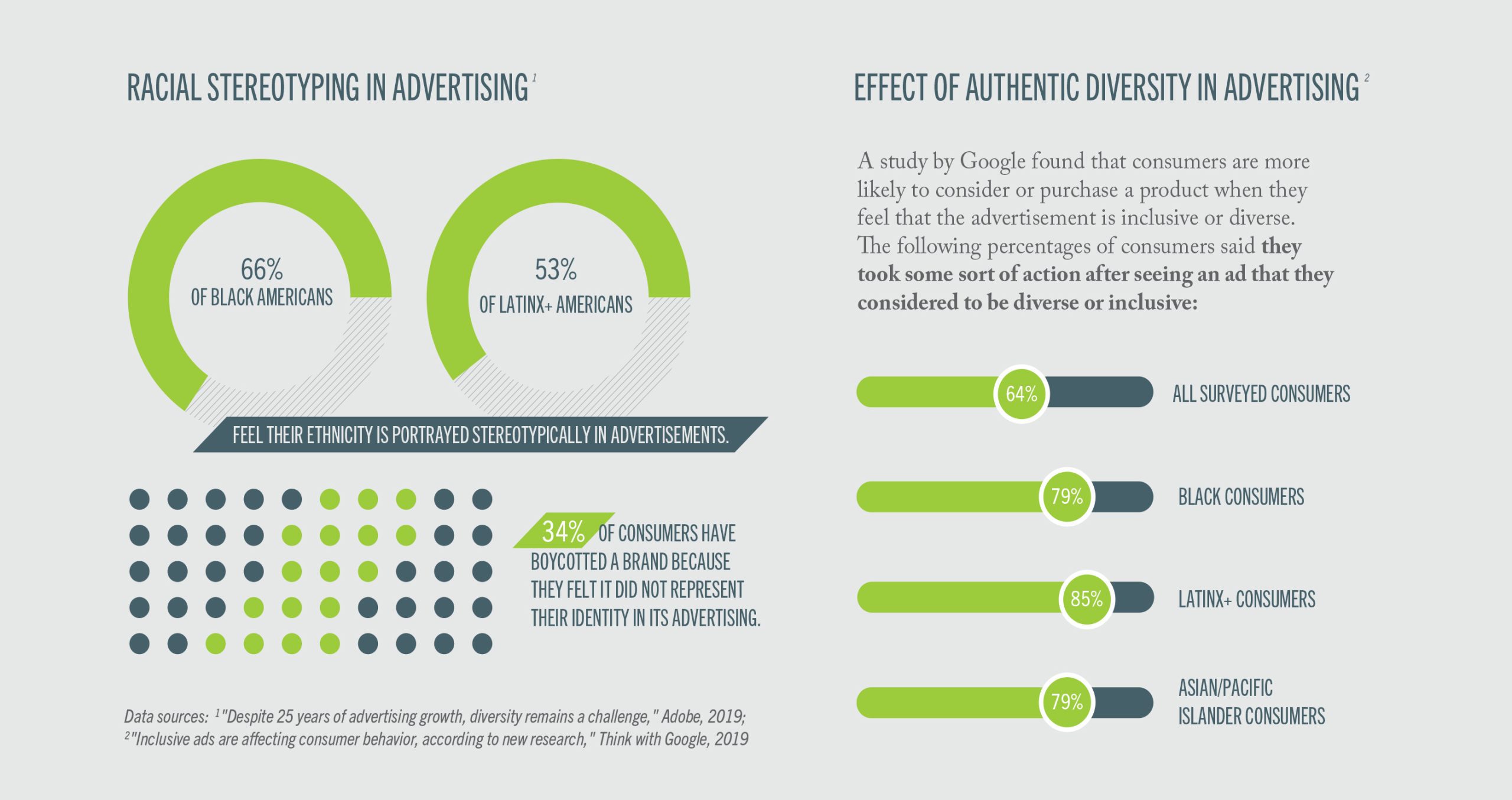 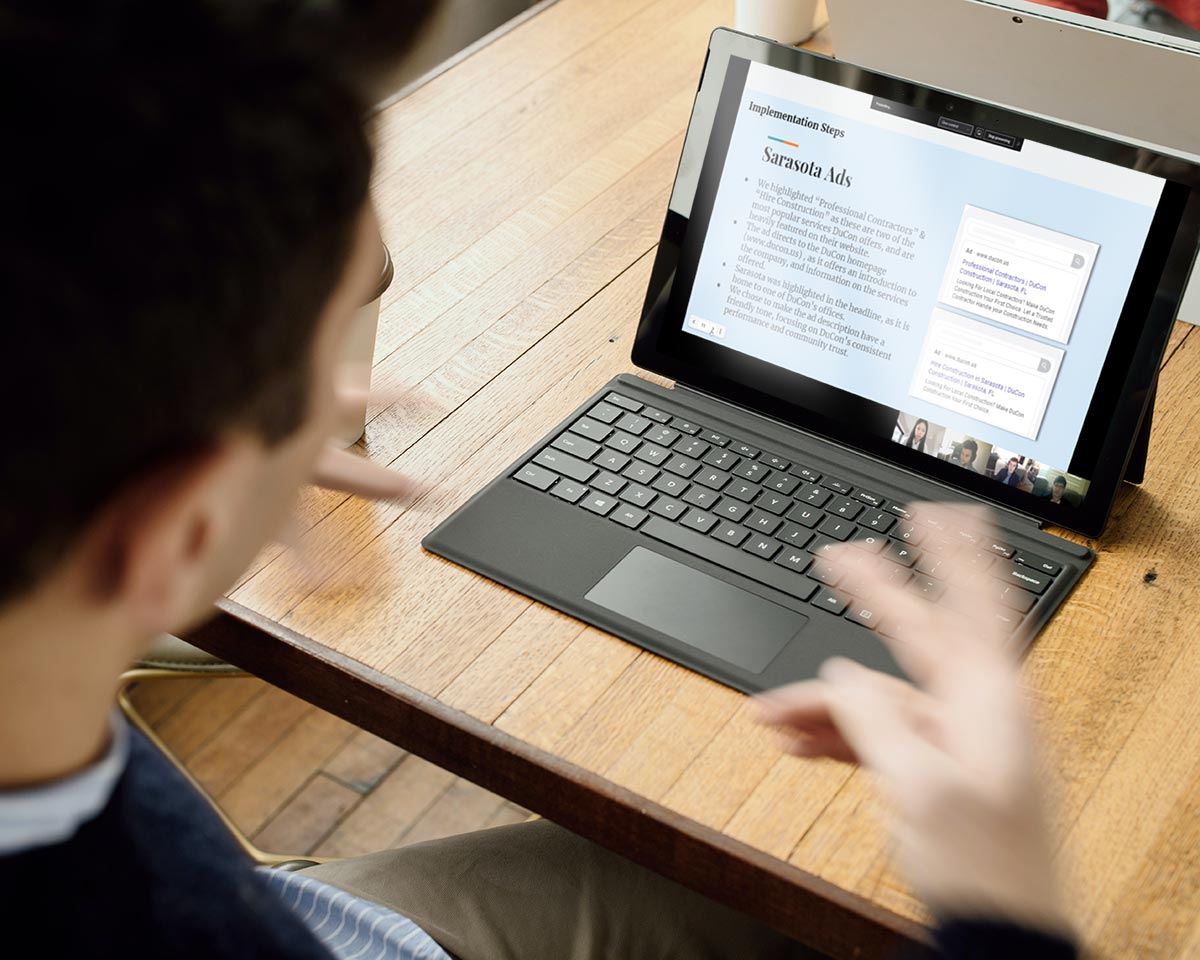 Cowart said the project’s goal was to help students understand the power of messaging, its influence and how to apply the lessons learned to a real-world setting. Most of her 22 students were white. The class included several with Asian and South American ancestry.

Funding for the class project came from a grant from the USF Research Task Force on Understanding and Addressing Blackness and Anti-Black Racism in our Local, National and International Communities, which launched in fall 2020 to address racial issues and attitudes on a local, national and global scale.

Before working with the companies, the students divided into seven groups. The companies included residential and commercial builder DuCon Construction and online personal-apparel retailer Profyle District, both based in Tampa. Cowart frequently works with local businesses as part of her classes.

“This wasn’t a cultural sensitivity class per se, but I wanted the students to be aware of how certain images can cause pain or anger to a group of people while also having the potential to damage a company’s reputation,” she said.

“I picked Black-owned businesses because I wanted the students to learn how to work with minority business owners and to communicate their message while respecting their goals and customer base,” she said. “If I can do that in a classroom situation, and tease out the stereotypes and misnomers that can be offensive to people of color, then that should help the students later when they’re in a professional setting and working with actual clients.”

Because the students were working with limited budgets, their campaigns focused mostly on social media messaging and techniques to optimize search-engine results. While race played a role in their understanding of the businesses, it wasn’t the main factor as their assignments progressed, they said.

“After hearing the companies’ presentations I didn’t get the sense that they were interested in expanding their reach into just the Black community,” said Hector Fontanet, 29, who worked with DuCon. “It was important for them to be seen as a minority-owned business, but they didn’t want to be seen as a business for minorities, but for everybody. They wanted to expand their customer base into all different demographics.”

Fontanet is seeking a master’s degree in global sustainability. He said that while some of his classes have touched on issues of cultural sensitivity, Cowart’s class opened his eyes to the historical breadth of implicit and explicit bias in advertising and the media in general.

“The class made you think and ask questions about how as a society we respond to messages in the media and how a particular image is framed and who this commercial or print ad is talking to and what it might be saying not just explicitly, but implicitly as well,” he said.

“I think it’s important to take a closer look at messaging in advertising,” he added. “When you look at it from an economic perspective, it absolutely makes sense to connect with people culturally and socially, and to be able communicate whatever your message is in a way they can relate to. It’s definitely long overdue to look at this from a business and marketing standpoint.”

Cowart says she’s evaluating the class as part of a possible research article. She said that whether that occurs, she would likely teach the class again because of its long-term importance to business and society.

“The stakes are high right now and companies are trying to get ahead of cancel culture,” she said. “This class is about preparing students to become future marketing leaders and removing bias from advertising.

“I want to help my students evolve into marketing professionals who are culturally aware,” Cowart said. “They might one day become decision-makers for marketing campaigns targeting people who are not like them. I want to equip them to critically consider how their messaging and images impact communities of color before a campaign is launched, not after a social backlash. My class and the class project are starting points for cultivating that awareness.”