Watching caregivers early in her social work career struggling to take care of their loved ones left a lasting impression on Jane Roberts, ACSW, LCSW, PhD.

Roberts, an instructor in the College of Liberal Arts & Social Sciences at the University of South Florida Sarasota-Manatee, spent 25 years prior to joining academia in 1998 as a medical and psychiatric social worker providing outreach and counseling services to families through various hospice programs in both Florida and Virginia.

“All of this opened my eyes to the need to continue to research best practices in helping (mostly older) caregivers to navigate this part of their lifelong challenges. And sometimes, with the closeness and sharing that can come with helping another person, to see even a bright spot or two in the caregiving process,” said Roberts, chair of the Duvall Family Studies Initiative in the College of Liberal Arts & Social Sciences, which brings university-generated research findings to clinical social workers, mental health therapists, case managers and other workers in human services fields.

“Although there are few options for alleviating the symptoms of dementia itself, reducing ‘caregiver burden’ is perhaps the next best option.”

Roberts, a licensed clinical social worker who is registered with the Academy of Certified Social Workers, has a doctorate in gerontology and has volunteered, organized and served on various hospice and other community service boards. She’s made it her life’s work to try to improve the lives of caregivers through continued research, including, most recently, caregivers of those with mid- to late-stage dementia.

Her clinical and administrative career has included psychotherapy, hospice and hospital administration, and employment by the federal government as a health research scientist, where she coordinated the Virginia portion of a multi-state study of veterans with Alzheimer’s-type dementias.

“Caregivers of dementia patients are uniquely faced with a frustrating and evolving set of behaviors that render their loved ones almost unrecognizable. Although there are few options for alleviating the symptoms of dementia itself, reducing “caregiver burden” is perhaps the next best option,” said Roberts, who likes to engage in applied research where outcomes are readily applicable in people’s daily lives.

Roberts has spent the past 6½ years studying and analyzing results from a recent collaborative study on caregivers of dementia patients in the Sarasota area, which has resulted in changes being implemented in Jewish Family and Children’s Service of the Suncoast’s (JFCS) six-county region and all over the United States.

Social workers and mental health professionals from hospitals to churches are reaching out for copies of the Community Practitioner Caregiver Guide – a 40-page booklet of tips and resources for caregivers that is a result of the research. The guide, which was developed in conjunction with Wilma Davidson, EdD, a Professional and Technical Communication instructor at USF Sarasota-Manatee campus, is helping to alleviate caregiver burden and anxieties and lessen the sense of isolation caregivers feel. Thousands of people have also been trained in caregiving and have attended informational workshops.

Caregivers of adults with and without dementia, and even caregivers of children, have asked for the guide, which is distributed at no charge due to funding from the Duvall Family Studies Initiative.

“USF Sarasota-Manatee campus has a real mission to be useful to the community,” said Roberts, who also teaches in the social work master’s program. “This research is a prime example of that endeavor, and it is really a rewarding experience to see it touch people’s daily lives.”

An estimated 5.7 million Americans of all ages were living with Alzheimer’s dementia in 2018, according to Alzheimer’s Association Facts & Figures. More than 15 million unpaid family, friends and neighbors provide care to those individuals. By the year 2050, more than 70 percent of Alzheimer’s patients will need caregiving at home.

Through funding from the U.S. Administration on Aging and U.S. Department of Health and Human Services, Roberts has analyzed and conducted research data stemming from a demonstration project conducted with JFCS of the Suncoast.

The caregiver intervention study from 2011 to 2015 looked at 213 families and the caregiver burden, caregiver depression, quality of life as perceived by the caregiver and physical wellbeing of the caregiver. Additional analysis also continued, and a second study evaluating the effectiveness of the outcomes ended in 2017.

The research served as a demonstration model of human services and family practice with caregivers of dementia patients in Sarasota, one of the regions with the highest rates of elder population in the U.S. at 35 percent.

The New York University Caregiver Intervention counseling and support intervention model was used, including various assessments, surveys and questionnaires.  The model was based upon the work of Mary Mittelman, DrPH, a research professor from NYU School of Medicine, who consulted with Roberts on the implementation of her model.

Roberts, who was the project’s designated researcher, evaluated data gathered from JFCS of the Suncoast’s records, meeting notes and staff conversations to determine the effectiveness of the agency’s interventions with caregivers of dementia patients.

“Caregivers will often have a good deal of guilt because they are feeling angry at the care recipients, and then they feel bad about that,” Roberts said. “They still love the person, but it’s almost not the same person you used to know.”

The study produced measurable outcomes showing that adding in-home services, individual and group therapy by licensed clinicians, support groups, ad hoc visits and telephone interviews as well as family social support were positive for caregiving individuals. The addition of services significantly helped to alleviate or reduce caregiver burden and enhance the perception of support, as well as decrease isolation and feelings of despair. Depression, for example, decreased 61 percent among caregivers and understanding of dementia increased by 71 percent.

Roberts has presented findings at conferences nationally and internationally. She presented her work at the American Society on Aging in New Orleans from April 15-18. Research collaborators Pamela Baron, MSW, and Cheryl Hamlin, LCSW, both of JFCS of the Suncoast, said the research, support groups and resource guide have been valuable. The collaboration with USF Sarasota-Manatee campus has resulted in the agency adding services and expanding support to caregivers. Baron said Roberts’ “extensive clinical skills proved to be invaluable in supporting staff as we faced complex family dynamics in coping with the challenges of living with Alzheimer’s disease.” Roberts’ research continues to examine ways to alleviate or improve depressive symptoms, social anxiety, traumatic incidents of flashbacks and other issues in veterans with post-traumatic stress disorder. 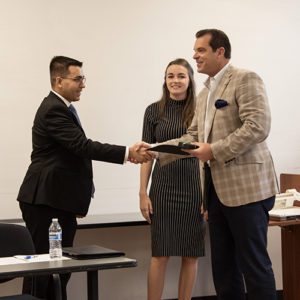 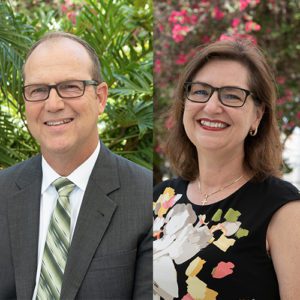