Murat Haner and Melissa Sloan recognized that the body of research into issues related to terrorism was vast when they launched a study of their own. Their work, however, considers a largely overlooked factor-the extent to which emotion influences public concern about terrorism and the policy measures surrounding it.

Haner, an instructor II of criminology at the USF Sarasota-Manatee campus, and Sloan, a professor of sociology, are among the first to distinguish between fear and worry in an examination of how each contributes to the way Americans perceive the threat of potential terrorist attacks.

“In many other countries, people don’t go to movies, they don’t go to shopping centers, they don’t fly or attend public events. It’s not at that level in the United States, but it can easily get there.”

The researchers developed a national survey of 1,000 Americans measuring the levels of fear of a terrorist attack and worry about terrorism relative to other potential harms. The results have appeared in three peer-reviewed articles, including “Public Concern about Terrorism: Fear, Worry and Support for Anti-Muslim Policies,” published in June 2019 in Socius: Sociological Research for a Dynamic World, an official journal of the American Sociological Association.

“We conducted one of the first studies to separate fear and worry and look at the effects separately,” Sloan said. “In a large body of literature on fear of crime, these two emotions are often conflated. They are separate concepts. Fear is an emotion that is reactive and not based on sustained deliberation, while worry involves ruminating about concerns.”

Their research showed a terrorist attack is the second greatest fear among Americans, behind only widespread civil unrest. Yet, worry about being the victim of a terrorist attack ranked below a number of other concerns, including a personal health crisis, a mass shooting, violent crime, a serious car accident or the threat of a home invasion.

The study showed that women, Christians, political conservatives and persons reporting greater overall levels of psychological distress tend to be more fearful of terrorism and to worry more about a terrorist attack. Fear and worry dropped among respondents with higher levels of education and those who pay greater attention to political news reports.

The survey also revealed the effects of emotion on attitudes about anti-Muslim policies such as surveilling Muslim neighborhoods and ceasing all immigration from Muslim countries, finding that individuals who are politically conservative and those who exhibit the greatest levels of fear and worry about terrorism were more likely to support such policies.

“Politicians are intentionally generating fear about terrorism and linking the issue of terrorism to Muslims and other minority groups to produce a tangible impact on the way voters cast their ballots. They exploit the fears and anxieties of voters to gain support for their own political agendas,” Haner said. “Research in the area indicates that negative attitudes toward some groups have been shown to influence political behaviors.”

In a follow-up publication, Haner and Sloan built on this research to more closely examine the threats and individuals’ responses to their perceived risk.

“We show that the threat of terrorism is a stressor that influences the lives of Americans,” Sloan said. “Its consequences have implications for community engagement, the economy and psychological well-being on an individual level. The fear-related behaviors can lead to feelings of social isolation, psychological symptoms and a lowered quality of life.” 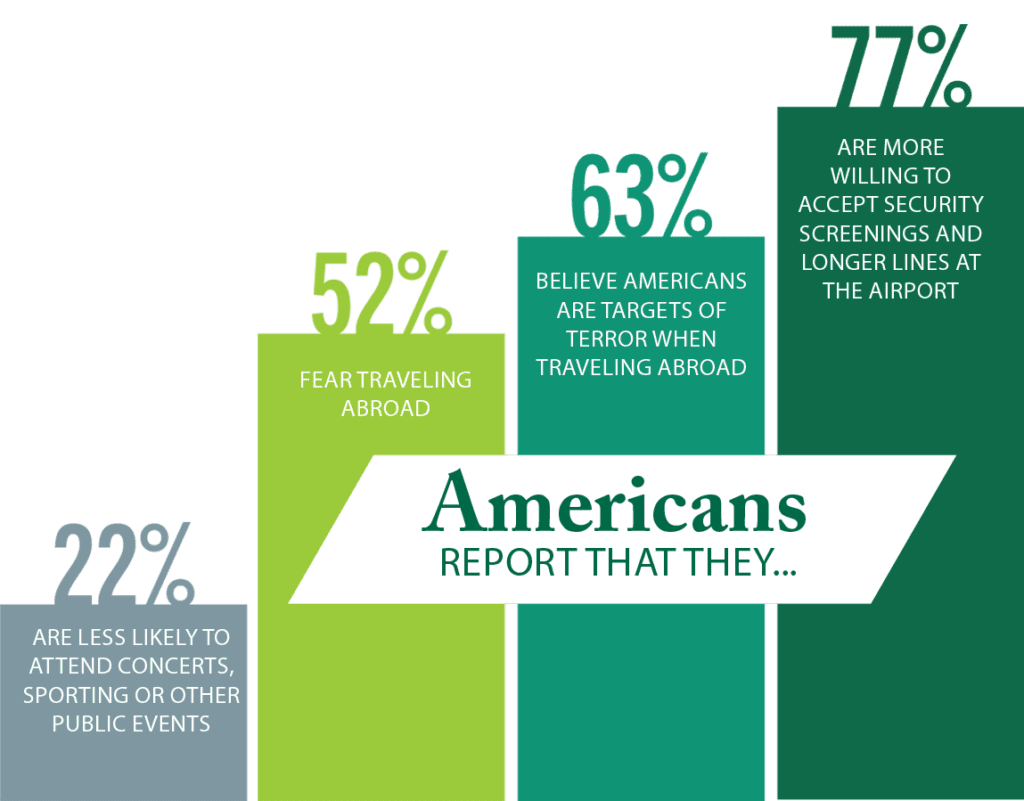 Statistics from The Chapman University Survey of American Fears, 2017